The Bow Maker’s Guide to Applying Rosin on a Bow

Correctly applying bow rosin is a little like the story of Goldilocks and the Three Bears. Apply too much rosin, and your bow will feel sticky and produce a harsh, scratchy sound. Apply too little rosin, and your bow will slip across your violin’s strings and make a faint, thin sound. Apply just the right amount of rosin and your instrument will produce a powerful, clear sound! So, how do you find that perfect middle ground? How much rosin do you need, and what’s the proper way to apply it?

We’ll walk you through everything you need to know, from selecting the right rosin to listening to know if you’ve applied the right amount.

Rosin is primarily made from tree resin or pine sap. “[It’s] drawn directly from living trees in a tapping process–in much the same way that maple syrup is collected (the process in no way harms the tree),” Strings Magazine explains.

Rosin goes through a purification process to become the amber-colored, sticky substance you’re familiar with. When applied to the horse hairs on a violin bow, rosin helps create friction between the bow and strings. A bow cannot grip the violin strings to produce sound without rosin.

What rosin should I use? First, make sure you use rosin that’s made for your instrument. Violin, viola, cello, and bass rosin are not interchangeable.

Next, know the three general categories of rosin: light, medium, and dark rosin. 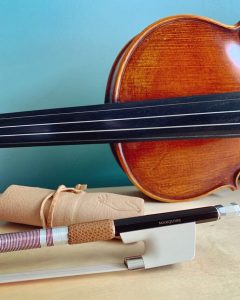 Why the different colors? “The color of rosin is dictated by the time of year during which it is collected. If the resin is tapped in late winter or early spring, it will be gold or amber in color and hard when set up. As the seasons change to summer and fall, the color of the resin darkens and the consistency softens,” Strings Magazine notes.

You’ll want a rosin that supports your playing style, produces the sound that’s right for you, and works best in your climate (humid vs. dry). Talk to your local CodaBow dealer about your skill level and playing style. They’ll be able to provide you with recommendations specific to your climate.

A brand new cake or box of rosin looks good enough to eat! It’s small, smooth, and glossy. But even though it looks perfect, it’s not ready to apply on your bow. You’ll need to roughen up the surface so that the rosin rubs off on your bow instead of slides over it. Score the surface with sandpaper or scrape it lightly with a fork. Stop when the block looks dull and starts showing dust—no need to poke the rosin or press hard.

You have the right rosin for your bow, you’ve prepared the rosin, and now it’s time to apply it!

Did you apply too much rosin on your bow? Again, please don’t use your fingers to wipe it off. You can continue to play until the rosin wears down to the right amount, or gently wipe the bow with a clean, dry cotton cloth.

What rosin should you use on a Codabow carbon fiber bow? We have a couple of different suggestions depending on your budget and desired feel.

We generally recommend that you use Leatherwood Rosin on a Codabow. It’s a premium brand and on the more expensive side, but it’s definitely our top pick.

Bella Rosin, Thomastik, Yumba, and Pirastro also make a wonderful rosin. So does Magic Rosin, which is especially good if you’re looking to customize the look and feel of your rosin. They make custom imprints with photos, logos, or artwork of your own, and also product custom colors like blue and red.

Wrap Up Your Rosining Technique

Once you’ve learned how to rosin a bow, it will quickly become second nature to you. Feel free to reach out with questions and follow CodaBow on Instagram and YouTube, and get added to our email list for more information on bow care and usage!

Since pioneering the original carbon fiber bow, CodaBow’s master makers and leading scientists have created award-winning bows for players of every style, station, and aspiration. Generations of players throughout the world trust their performance to CodaBow.